Generation of Heart Vessel with Patient’s Own Stem Cells 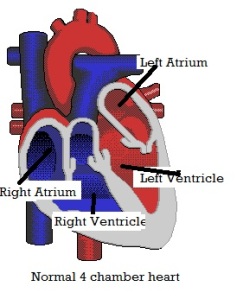 In the article, “To Fix a Heart, Doctors Train Girl’s Body to Grow New Part,” the Wall Street Journal reported yesterday on an adult stem cell treatment which may revolutionize care of as many as 3,000 children a year. The story focuses on Angela, now 4 years old, who was born with “hypoplastic left heart syndrome,” a condition in which a child never develops a normal 4 chamber heart.

Think of the heart as two tubes, each with an atrium or upper chamber and a lower chamber, the ventricle. The lungs are between the two, and the system is set up so that low oxygen blood does not mix with the blood that is saturated with oxygen.

If there is only one ventricle, the system can’t adapt to increased need for oxygen. Not only is the ability to pump the blood not enough to increase when exercising, excited, or scared – or even growing – but the oxygen-rich blood always mixes with the depleted blood, even on the way to the lungs.

Without surgery, 70% of children die before they turn one year old. Up until now, the corrective surgery has involved using grafts of artificial tubes, that don’t grow, and need to be replaced every so often.

The new technique uses a “bio-absorbable” scaffold on which the patient’s own stem cells are seeded and grown. This new blood vessel is surgically implanted so that the anatomy, and the blood flow, is more like the normal heart. It’s hoped that the new graft will grow with the child and prevent the need for repeat surgeries as the child grows.

In the end, the choice to become the first patient in Dr. Breuer’s study turned on three things, Ms. Irizarry says: the family’s faith in God, their trust in the doctor, and the potential for a natural blood vessel that could possibly help avoid more surgeries. “Before, they were using plastic, now they’re using this special graft that will grow with her,” Ms. Irizarry says.

Angela is the first, so we don’t really know whether the new vessel will grow with her. But there’s evidence from other, similar procedures to build new bladders and other organs.

Unfortunately, the process of getting the new procedures from early trials to use for those 3,000 babies a year is complicated and slow, even with an FDA “exemption:”

Development of the procedure has been painstaking. Dr. Breuer undertook four years of laboratory research after he joined Yale in 2003 before seeking approval from the U.S. Food and Drug Administration in 2007 to test the approach on patients. It took four more years and 3,000 pages of data before he got a greenlight. The study builds on the cases of 25 children and young adults successfully treated in Japan a decade ago with a similar approach.

Dr. Breuer, who holds several patents through Yale related to the technology, expects to implant a tissue-engineered blood vessel in a second patient soon as part of a six-patient study to test the safety of the procedure and determine whether the blood vessels actually grow in the body as a child gets bigger. The hope is that if these patients are treated without a hitch, the procedure may be available under a special FDA humanitarian device exemption, which would allow Yale to charge for it while conducting a larger study.

It’s a shame that it took so long to get the procedure to the first patient, and that many more will have to wait even longer. There must be a way to place judgement before bureaucracy in these cases.